This is another popular-science post, for anyone out there who wants to see the light of network science! It could be considered a network sermon of sorts. This is also the way how I begin my course on complex networks and most of my pop science talks. 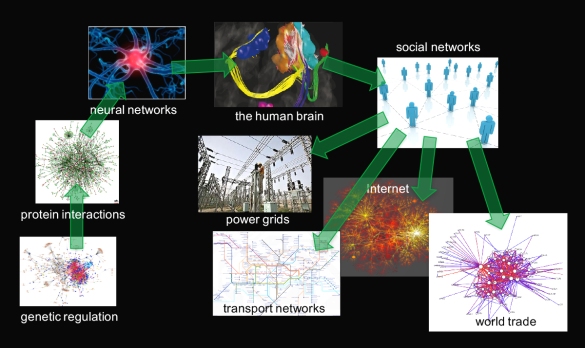 So, why are networks so fundamentally important? Because they exist on all levels of the living universe.

Let’s begin by having a look at what’s inside our cells. First, there is some (messy) software written into double-stranded DNA, where the functional subunits are called genes. They like to talk to other genes, upregulating or downregulating their activity. This network of genetic regulation determines what happens inside our cells. In particular, it determines which proteins are to be built. Mirroring the genes that code for them, the proteins also like to interact, again forming a network (which is coupled to the network of genes…). To make all this happen, some fuel and some building blocks are needed, and this is taken care of by a network of chemical reactions: the metabolic network that is responsible for the logistics of energy and matter.

As it often happens in nature, similar kinds of structures emerge on multiple levels. If we now zoom out from inside the cells and look around, we again see networks. This time, the networks are those of cells talking to one another and influencing each other’s actions, the immune system being a most beautiful example (I’ll return to it in a later post). But there are no cells that are more fond of networking than neurons, the nerve cells. I am typing this paragraph because of spike trains transmitted by each of my ten billion neurons to about ten thousand other recipient neurons (this much can be said, but no-one knows how these spike trains actually encode the words that I am typing). These neurons are the fundamental building blocks of my brain, a network of enormous complexity (and by that I don’t mean my brain but any human brain).

Let us continue zooming out to get a broader view. Just like the neurons inside them, brains also like to network! Practically speaking, we do not even exist in isolation. Our brains have evolved into social supercomputers: most of the concepts inside our heads exist because larger networks of brains have agreed that they are meaningful, and developed a language to describe them. And boy have we come a long way from those times when these larger networks were of the size of a tribe (of about 150 members, it has been claimed). Now our connections transcend space and time through social media and the Internet, and we are all part of a gargatuan social network that spans the entire planet.  What is happening right here, right now, is a long-distance connection between two brains. One brain talks to another, mine to yours, across time and distance. Hi, brain!

But these networks of brains do not only exist for talking. We humans like to build things: systems of trade, structures of power, grids that transmit energy, webs that transmit information, organizations that exist for making things that didn’t exist before. We dig up raw materials and transform them into parts that are brought elsewhere and merged with other parts to make larger parts, over and over again, until this complex weave of logistics and manufactoring spits out cars and cloud servers. We connect cities with ships and trains and airlines; we connect minds with phones and computers.

We really, really like to build networks. But we cannot do it alone, so we connect with others. We form networks that build networks. The same thing that happens on all levels. From genes to cells, from brains to people. Networks building networks.

This is why networks are cool, essential, and beautiful.

(I’ll stop here to end on a high note. I’ll talk about applications and other earthly things in later posts).

5 thoughts on “Networks are everywhere, and they are beautiful”

I am a scientist who studies complex systems and networks. I am a full professor at the Department of Computer Science at Aalto University, Finland.

How to Write a Scientific Paper is now available!

Get my little writing guide from Amazon or other digital stores (Apple Books, Kobo, etc)!